skip to main | skip to sidebar

April 30, 1975: United States Evacuates Saigon, Flees In Advance Of Viet Cong Moving In To Re-Take Their Own Country.


The U.S. War Against Vietnam. 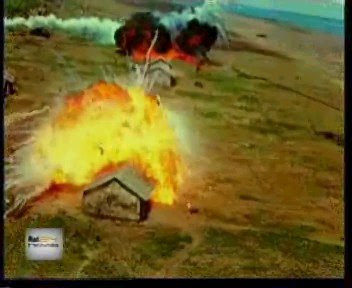 Vietnam is a small nation in Southeast Asia. It has been attacked and occupied by foreign countries for generations, and the people have developed a commitment to independence and resistence to being controlled by any foreign country. It was a French colony ("owned" by France) before World War II, and the French stole the resources, propped up a corrupt puppet regime as a "pretend" government, and enslaved the people.

During World War II, the Japanese invaded and the French fled, leaving the poor Vietnamese with no protection except themselves. Many of them fought valiently and heroically against the Japanese under the leadership of Ho Chi Minh. After World War II was over, Ho Chi Minh went to the leaders of the Allied nations (U.S., France, England, Soviet Union) and petitioned for Vietnam's freedom. He said that the people of Vietnam did not want to "belong" to France or anyone else, but instead wanted the freedom and independence that the allied forces had just fought for throughout the Pacific and Europe. They were turned down, and Vietnam was once again declared to be a colony of France -- to "belong" to the nation of France.

Not surprisingly, many of the Vietnamese did not accept this decision and began fighting against the French. Beginning in the early 1950s, the U.S. started giving money to France to prop up its colonial empire in Vietnam. The U.S. theory was that if Vietnam was "given" its freedom, they might become aligned with China, which became Communist in 1949, and the U.S. did not want Communism to spread. Therefore, the people of Vietnam would have to remain slaves forever. Or so the U.S. believed. 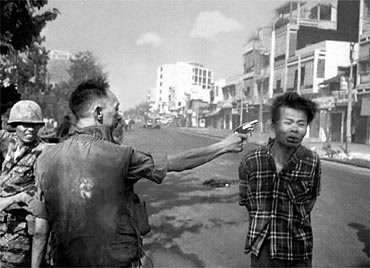 (Our allies, the South Vietnamese, execute suspect without inquiry or trial. Pictures like this were common, and helped to turn the American public against this war. This is a 1968 Pulitzer Prize-winning photograph taken by Eddie Adams, showing the execution of a young man by a South Vietnamese official).

The financial aid did little to help the French, who were quite masterfully routed at Dien Ben Phu. The U.S. began sending in military advisers, then special groups, and eventually troops. And this commitment continued for over twenty years, with the U.S. eventually taking over the entire war. The strongest country in the world, richest nation, biggest military, was nonetheless defeated by the people of Vietnam.

Vietnam was divided into two: South was Western-controlled and aligned. North was anti-Western, pro-freedom, and communist (or at least nationalist). Many people in the south were sell-outs and traitors, betraying their own people and even family. Many were just caught in the middle.

Some people in Vietnam burned themselves to death publicly in opposition to the U.S. war against their country. 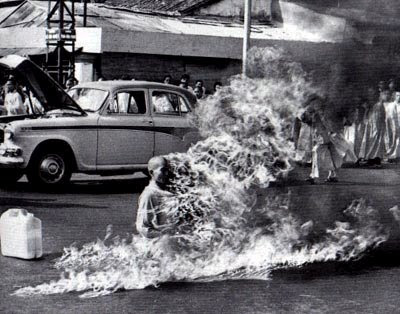 The U.S. had by far the superior military force. The air bombing of Vietnam was probably an international war crime. See Errol Morris's "The Fog Of War" for a brilliant discussion of the war in Vietnam, and Robert McNamara's viewpoint decades down the road.

The "Body-Count" became a public relations tool during this war. Because the Viet Cong were such a poor group of people, the American political leadership just could not understand why the U.S. couldn't just crush them. But no matter what we did, they reorganized and fought back. The Body-count was designed to try to justify the increasing war commitment despite its growing unpopularity with the U.S. population. The military would report in that they killed so many people here, so many there, and the grand total would be reported as evidence of "success." 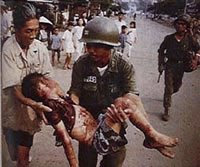 (First we dropped napalm on the villages, then the poor draftees were stuck carrying out the bodies of young children, hopelessly burned over much of their bodies, and trying to figure out exactly WTF this war was all about.) 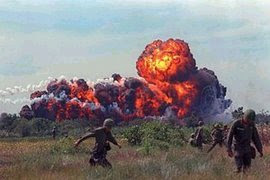 We had "free fire" zones. John Kerry, to his disgrace, volunteered to be assigned to a free-fire zone. A free-fire zone was one in which the U.S. military were told that they should fire at anything that moved. So they would approach villages and, if they heard any noise, just open fire. Women, children, grandmothers, it didn't matter. It was "free." Free killing. No consequences.

We also used chemical warfare against the civilians of Vietnam. You'd never know it to hear the U.S. politicians proclaim chemical warfare as the most hated weapons of a monster like Saddam Hussein. But no, actually, we used them, contrary to various international treaties in existence after the World War I use of gas was declared abhorent. We dropped napalm, an herbicide, all over the country. It was supposed to kill every single plant that grows in the ground, and prevent anything from growing back for a long time.

We dumped white phosphorous onto the people. We dumped Agent Orange, another chemical plant-killer which, as it turned out, also killed people. Including many Veterans who came back to the U.S. and developed a series of horrible diseases including cancer, and died very young. And the United States denied until very recently that Agent Orange caused these problems. So we killed our young, betrayed our veterans. Same old story.

In Vietnam, it is estimated that 400,000 Vietnamese were killed from direct exposure to Agent Orange, 500,000 were born with birth defects caused by their parents' exposure to Agent Orange, and two million additional people have developed cancer and other serious illnesses from the effects of Agent Orange in their country. The United States has done essentially nothing to either compensate the Vietnamese victims, or take responsibility to clean up the chemical disaster it created in that country.
http://www.theglobeandmail.com/servlet/story/RTGAM.20080711.worange1107/BNStory/Front/home/?pageRequested=all

Most of the young men who went to Vietnam were drafted. They didn't want to be there. Most people didn't even know where Vietnam was, never mind understanding why we were in a war there. There was a tremendous gap between the officers and the draftees. The officers were often ROTC-trained college kids who learned the "correct" way to engage in war, but that way was suicidal in a jungle environment. They would order their men to walk down the middle of a road, for example, but time and again the men would be ambushed from the side and slaughtered. The draftees became so enraged at the incompetence of the military leadership that some began killing their officers -- a practice that was so common that it was given the name of "Fragging."

Two million Vietnamese were killed during the U.S. War Against Vietnam. 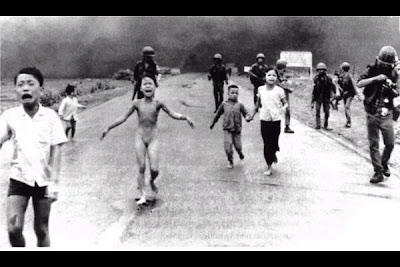 (Children flee napalm being dropped onto them by U.S. military planes).

Over the entire period of the U.S. War Against Vietnam, 3.4 Million Americans were sent to fight against the Vietnamese, 58,000 Americans were killed, and 150,000 were injured. http://www.infoplease.com/ipa/A0004615.html Between 20% and 30% of the 3.4 million servicemen and women suffered from post traumatic stress disorder when they came back to the United States. http://www.news.harvard.edu/gazette/2006/08.24/99-ptsd.html Many of them never recovered and became homeless alcoholics and drug addicts, their lives forever ruined by that war.

Finally, on April 30, 1975, the North Vietnamese converged at the outskirts of Saigon, the capital of South Vietnam, and the U.S. evacuated in a panic. The stunning photos and news video for the two days of April 29 and 30, 1975, shown on televisions around the world, were from the the U.S. embassy building in Saigon, helicopters landing, packing in as many people as they could hold, then taking off in a white-hot panic and depositing the people in ships waiting off-shore. 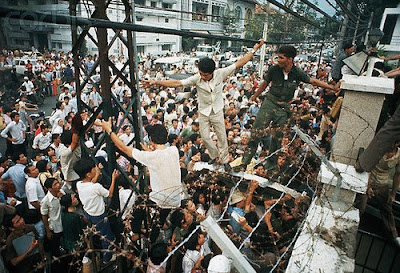 (The U.S. military tried to hold back the South Vietnamese who massed outside the embassy in Saigon, desperately hoping the U.S. would let them get on the evacuation helicopters).

Many of the South Vietnamese people had worked with the Americans, and knew they would likely be killed once the Viet Cong took over the city. But not all of them could be evacuated. Many were left behind, which gave rise to the phenomenon known as the "boat people." Vietnamese people would cram into boats and set out to sea, hoping to reach land in another nation, willing to live in a refugee camp if necessary. 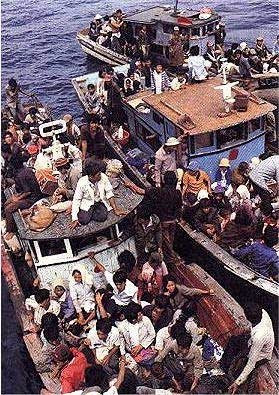 The reason the Vietnamese who came to the U.S. are so extremely radical and right-wing is quite simply because they were radical and right-wing in their own nations. They may have thought they were acting properly, but the fact is they sided with western nations (first France then the U.S.) that militarily occupied and controlled their country and killed many of their own people. It's hard to have much sympathy for anyone who betrays their own country and sides with an occupying force. Of course some of them were quite innocent, just caught in the middle.

To this day, the right-wing in this country insists that we should have stayed in Vietnam, nuked them all, killed all the people. Because they were humiliated at the thought of "losing" the war. These people are too stupid to ask whether we had any business being in that country in the first place. Vietnam never attacked us, never attacked any other country, didn't threaten us. We waged a war of aggression against Vietnam. Our reason was because we were afraid of China, now our biggest business partner. We were wrong to have invaded Vietnam, wrong to have waged the 20-year war against them, wrong to have killed 2 million of their people. 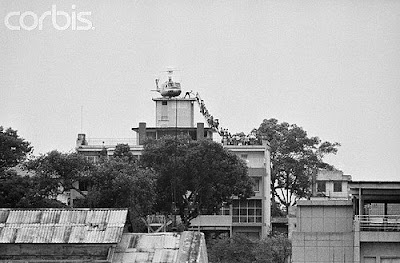 (Once it became obvious that Saigon was going to fall quickly, with relatively short notice, the evacuation of U.S. personnel began in haste. Ships were brought near the shore, and helicopters were sent to certain buildings in Saigon to try to evacuate the Americans and as many of the South Vietnamese who had worked with the Americans as they could fit in. When people ask "when will the helicopters begin landing on the roofs in Iraq," they're referring to this famous scene). 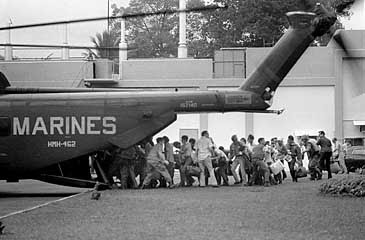 The scene at the U.S. Embassy in Saigon was one of terror and panic, as the South Vietnamese who had worked with the Americans gathered outside the walls, trying to get to a helicopter so they could be evacuated.

Just like in Iraq -- we had no business going in, we cannot "win" an unjust war, and the only thing we can do is to leave. But I guess President Obama hasn't figured that one out yet, so more people will have to die.

There are 5 million Iraqi refugees living in horrid conditions in neighboring countries. We have littered Iraq with depleted uranium from U.S. weapons, which has already caused a radical increase in birth defects and cancer from the last time we invaded them, and will do the same this time. There is something called the Gulf War Syndrome which has sickened and disabled a large percentage of the young people who served in the U.S. military in the first Gulf War. The U.S. government denies liability for that, just like they denied liability for the Agent Orange cancer and birth defects for many decades. And it is equally unlikely the U.S. will ever do anything to clean up Iraq, just as we have done nothing to help clean up (the chemicals) in Vietnam.

We really need to get out of this war business. The only people who profit from war are the owners of corporations like Halliburton and Blackwater. The people who suffer the most are the innocent civilians and the children from the working classes who are sent to fight, kill or be killed. End the wars. Bring the troops home. Not next year, but now.

Fiona Bernard
Fiona Bernard has been an attorney for over 25 years, a music and baseball lover even longer, and a progressive from birth.